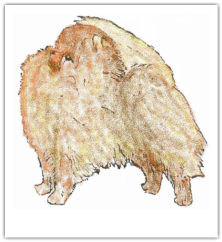 A Breed Standard is the guideline which describes the ideal characteristics, temperament and appearance including the correct colour of a breed and ensures that the breed is fit for function. Absolute soundness is essential.
Breeders and judges should at all times be careful to avoid obvious conditions or exaggerations which would be detrimental in any way to the health, welfare or soundness of this breed.

From time to time certain conditions or exaggerations may be considered to have the potential to affect dogs in some breeds adversely, and judges and breeders are requested to refer to the Breed Watch section of the Kennel Club website here http://www.thekennelclub.org.uk/services/public/breed/watch for details of any such current issues. If a feature or quality is desirable it should only be present in the right measure. However if a dog possesses a feature, characteristic or colour described as undesirable or highly undesirable it is strongly recommended that it should not be rewarded in the show ring.

Head and Skull
Head and nose foxy in outline, skull slightly flat, large in proportion to muzzle which finishes finely and free from lippiness. Nose black in white, orange and shaded sable dogs; brown in chocolate-tipped sable dogs, but in other colours may be self-coloured, never parti-coloured or flesh.

Ears
Relatively small, not set too wide apart, nor too low down, but carried perfectly erect.

Neck
Rather short and well set into shoulders.

Forequarters
Shoulders clean and well laid back. Fine-boned legs, perfectly straight, of medium length in due proportion to size of dog.

Body
Back short, body compact, well ribbed up, barrel well rounded. Chest fairly deep, not too wide but in proportion to size of dog.

Hindquarters
Fine-boned, legs neither cow-hocked nor wide behind; medium angulation.

Colour
All whole colours permissible, but free from black or white shadings. Whole colours are: white, black, brown, light or dark, blue as pale as possible. Orange which should be self-coloured and bright as possible. Beaver. Cream dogs have black noses and black eye rims. Whites must be quite free from lemon or any other colour. A few white hairs, in any of the self-coloured dogs permissible but undesirable. Dogs (other than white) with white or tan markings highly undesirable and not considered whole coloured specimens.

Shaded sables should be shaded throughout with three or more colours, the hair to be as uniformly shaded as possible, and with no patches of self-colour.

In mixed classes, where whole coloured and parti-coloured Pomeranians compete together, the preference should, if in all other points they are equal, be given to the whole coloured specimens.

Faults
Any departure from the foregoing points should be considered a fault and the seriousness with which the fault should be regarded should be in exact proportion to its degree and its effect upon the health and welfare of the dog and on the dog’s ability to perform its traditional work.

*Note for prospective puppy buyers
Size – the Kennel Club Breed Standard is a guide and description of the ideal for the breed; the Size as described does not imply that a dog will match the measurements given (height or weight). A dog might be larger or smaller than the Size measurements stated in the Breed Standard.