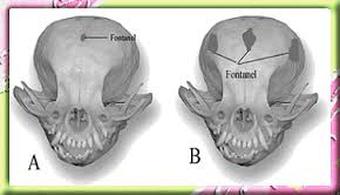 How to assess for insufficient closure of the fontanel

Pomeranians should not have an open fontanel when mature (some discretional allowance may be given to puppies up to 10 months however must still be reported).

The Pomeranian Breed Standard states that 'HEAD AND SKULL: Head and nose foxy in outline, skull flat, large in proportion to muzzle which finishes finely and free from lippiness.'  As a consequence to meet the breed standard the skull should be completely closed at maturity.

From January 2014, as part of Breed Watch, judges at Championship shows have a mandatory responsibility to assess and report the number of exhibits present that have 'insufficient closure of the fontanel'.


Examination process
Starting from the stop press gently but firmly through the coat onto the skull moving in a decisive but
thorough manner towards the occiput.

Do not press with undue force against the skull - particularly if an open fontanel is discovered.

A video of this process can be found on our Facebook page by pressing the button below.
Video of assessing for the insufficient closure of an open fontanel

Step by step photographs showing how to appraise the head for fontanel abnormalities (without causing distress or discomfort to the exhibit).  Ideally, this should form part of the examination of the head from the stop to the occiput.
Thanks to Suzie Q for giving up her Sunday for modelling duties.